NEW YORK November 17, 2012 – Airsoft players in the Northeast are a very dispersed community but Hurricane Sandy affected us all. In the days immediately after the storm, many of us were trapped by the traffic, lack of power and gas. Those of use who survived unscathed felt an urge to help.

I started contacting airsoft fields across the Tri-State and organized Airsoft C.A.R.E.S. Shogun, Sinner, and Phridum gathered support from retailers, producers, and their companies such as Evike.com, Operation Lion Claws, Airsplat,Advanced Disposal, Airsoft Atlanta and Urban Ops Armory. And to the press through Popular Airsoft, Thumpy’s 3D House of Airsoft, and the New York Post

There were 6 events, in 3 different states, over two days. All the fields focused on raising funds for charities engaged with communities recovering from Sandy. I was able to attend two of the events in Long Island, while other friends and NYC Airsoft members attended events at the other fields: Sinner at Zulu24, Cookie at Chaos Airsoft, Whiskey Whiskey at Hells Half Acre and Primer at the Grid Code.

At Strike Force sports, they opened their doors before normal hours to allow NYC Airsoft members and registered players to hold a private CQB session. Afterwards, Paul the owner of SFS, took us on a sneak peak at their new pistol course. Players who attend got swag and prizes supplied by Evike.com, Urban Ops Tactical and John Lu’s OP Lion Claws.

After a lunch break, I joined Rosales and Shogun at Modern Air Strike where they dedicated their 2pm-5pm session to fund raise for CARES. I introduced the players to our style objective based scenarios such as Sugar Hill and Moondomination, which was a change of pace from their usual team death matches.

In the evening we set up a steel target pistol challenge with prizes supplied by Ricochet Tactical and Evike.com. Shaq, the owner of Ricochet Tactical, competed and took an honorary 1st place in the initial timed runs. His time was eventually beaten by brothers Chris and Cory after buying additional entries to the course.

Further south near the hard hit Jersey Shore, Hells Half Acre hosted players in an outdoor CQB arena. The game was supported by Airsplat which provided swag and raffle prizes.

The biggest event of Saturday was staged at Zulu24 by members of Hudson Valley Vanguard and NYC Airsoft. Tons of swag were supplied by Evike.com and Lifeline Tactical created a banner for the event. And the donations were matched by game sponsor Advanced Disposal.

Overall the Airsoft CARES events raised over $3500 for charity. But most important of all, it showed that airsoft players can do more than just shoot plastic at each other. To all the field owners, sponsors and players who attended: thanks! 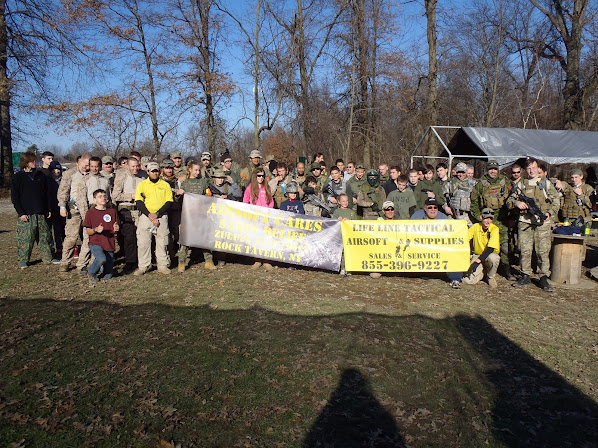