The principle is discussed in Sniper School when applying face-paint. http://www.olive-drab.com/od_soldiers_gear_camo_face.php

Most beginners actually do the opposite and paint lighter on top and darker on the bottom which actually makes the shape of your rifle stand out more, because it enhances the shadows that our eyes use to make out the physical shape of an object. Brayski used the countershading technique in painting the barrel and scope of his sniper rifle. Because you don’t see the usual shadows under the scope, it makes the shape flatten out and meld with the background even though the pattern and color doesn’t match.

Another painting technique uses just 2 colors like tan and OD. With tan, paint over the entire AEG. Then paint the darker OD along the top half of all surfaces. Use a fading wave-like edge separating the colors. Then using spotting bursts to break up the edge, similar to the ME262 below. This technique does not require any stenciling or masking. Countershading was used on US tanks in the early part of WW2 but was dropped for simplification of production and in practical use, dirt and mud covered such paint jobs rendering them moot. But the theory was still sound. 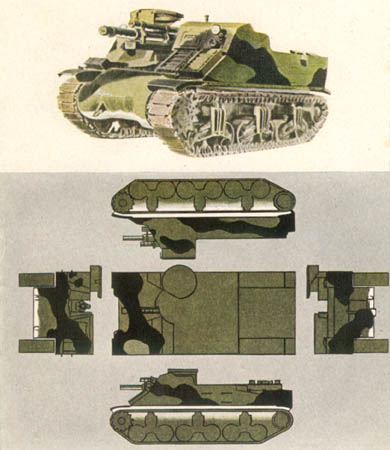 Note counter shading white paint on the underside of the canon barrel wheels and suspension undercarriage.

And finally here is an excerpt from the US Naval paint instruction manual from WW2 along with a diagram showing the use of the “Graded Paint Scheme” intended for use against other surface ships in theaters of operation where threat of aerial attack was minimal.http://www.hnsa.org/doc/camo/index.htm

This measure is intended for use on combatant ships in areas where bright weather with fair visibility predominates, and high angle aerial observation is unlikely, and there is a likelihood of a gunnery engagement. There will be some reduction of visibility when viewed from low-flying planes, and from higher altitudes at extended ranges.

Navy Blue 5-N To be applied to the hull to the height of the main deck edge at its lowest point, as shown on Plates XIV to XVII. The upper edge of this Navy Blue area should be horizontal.

Haze Gray 5-H All remaining vertical surfaces and all masts and small gear.

How effective is it? Well if evolution is any guide, lighter coloration on underbellies are found in both prey animals and predators.